Continuing clockwise around World Showcase, we pass right past the Brewer’s Collection (because there’s only so much one can drink without ending up at Guest Relations) and land in Germany. If you do stop at Brewer’s Collection, there are some really interesting beers to try, including the much-hyped Schofferhofer Grapefruit (which is generally better in the bottle than what I’ve gotten at Food & Wine which last year was a bit skunky) and BraufactuM Roog Smoked Wheat Beer which I am very sad that I didn’t get to try. I’ll be on the lookout for that one.

But this is about the Germany booth and the food at that booth, and we DID try each of the offerings here. Sadly nothing really stands out here as a “must-try”. It’s all fine comfort food, but not terribly exciting.

First, the Schinkennudeln (Pasta Gratin with Ham and Cheese.)

That’s mac and cheese to you and me

It’s fine. Hard to go wrong with mac and cheese. I sort of wish they’d just leave out the ham though, so that there could be an additional vegetarian dish at Food and Wine. My vegetarian friends have precious few items that they can sample, and end up eating mostly desserts. It would be so easy to omit the ham here – it’s not doing much for the dish.

A little less successful is the Roast Bratwurst in a Pretzel Roll.

That’s one long brat! Overall it’s pretty mediocre, and we just didn’t really enjoy this. The roll is fine, though for some reason we like it much better at the Biergarten restaurant. If you’re a completist and must try everything at Food and Wine, then go for it, but otherwise I’d skip it. 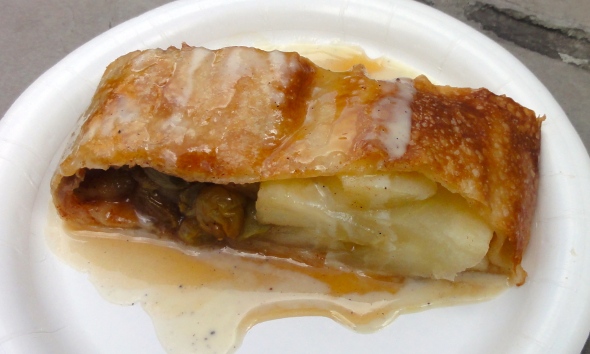 As you might expect, the apples, caramel, and vanilla sauce were really yummy. The crust though was sort of hard to eat – not flakey or crispy, so it made it hard to cut with the side of a fork. Still, this was my favorite dish in Germany.

The best part of eating in Germany though? Sitting at a little table near the fountain in the middle of the German pavilion while mini-MouseChow played the Agent P game and made Doofenshmirtz come out of the clock tower. (We also made a pass through Karamel Kuche and got some chocolate and caramel covered strawberries. Mmmmm….) 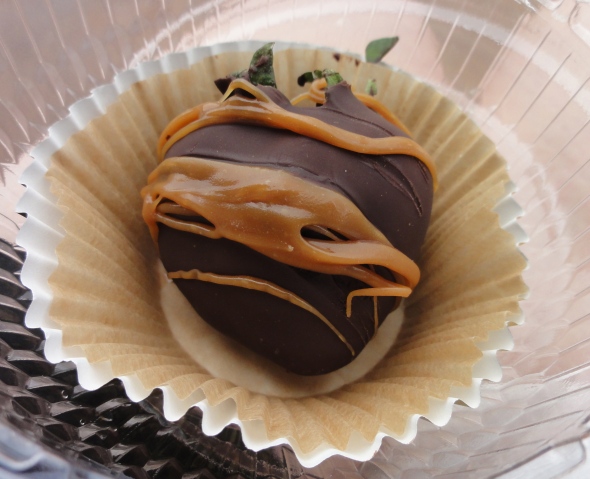 Best thing we ate in Germany

And ya know what? You can get this year-round.

One thought on “Epcot Food and Wine Festival 2013: Germany”