In my last post, I gave some tips on avoiding lines in the Wizarding World of Harry Potter, and my opinion on Butterbeer.  (The short of it:  too darned sweet.)  So let’s talk food.

First, there are very few places to actually eat within the Wizarding World.  I guess those kids get everything they could desire in the Hogwarts dining hall, the most amazing school cafeteria ever, so they don’t eat out much.

The only restaurant in WWoHP is the Three Broomsticks, and like everything else there, the theming is spot-on.

On our first trip to visit Mr. Potter, we didn’t make reservations, the crowds were ginormous, and we couldn’t eat within WWoHP. Instead, we left the area and went to Mythos (hands-down the best restaurant in Universal, and located a very short walk from the gates of the Wizarding World.) We were disappointed to learn however that we were not allowed back IN to the World after leaving, until after 3pm when the crowds thinned out. Be forewarned that this is a possibility, especially during peak season.
On my second trip, because I was at the WWoHP at 8am, I planned ahead and made breakfast reservations.
I went for the Traditional English Breakfast, which includes scrambled eggs, baked beans, mushrooms, grilled tomato, sausage links, English bacon, a croissant, potatoes, and black pudding.  I’m a sucker for black pudding.  Unfortunately, it was pretty awful.  It tasted like the heat lamps had sucked the flavor and moistness from everything.  The eggs had the consistency of bad reconstituted powdered buffet eggs, and the mushrooms and black pudding were so dry as to be inedible.  The beans tasted like they came straight from the Heinz can.  I forgot to take a  picture until half-way through my meal, and have chosen not to show you the half-eaten food.  You’re welcome.
Other breakfast choices are oatmeal (Porridge breakfast), a continental breakfast, American breakfast (eggs, potatos, bacon, etc.), pancakes, and smoked salmon.  I suspect that the American breakfast will have many of the same issues as the English, so you are probably better off with the other choices if you go.
I didn’t eat dinner there, but my helpful brother did, and sent me his photo of the roast chicken.  He said they enjoyed it.  He’s fairly discerning, so I’m guessing it was OK, but I won’t be going back there for the food.  Looks alright, though.  I’m giving it 2 Mice.  It’s worth a peek for the theming. 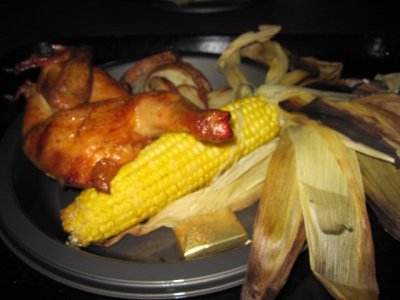 Connected to the Three Broomsticks is the Hogs Head pub.  They serve a variety of non-alcoholic drinks (including butterbeer and pumpkin juice) as well as bottled and draft beers.  Draft includes Guinness and Boddingtons, as well as their own Hogs Head Brew (a red ale).  It’s the kind of place that you wish existed in real-life, near your house.  Because chances are when you’re in Universal, it will be too crowded, and you’ll be too busy, to hang around drinking beer and chatting by the fire.  The pub gets 4 Mice. 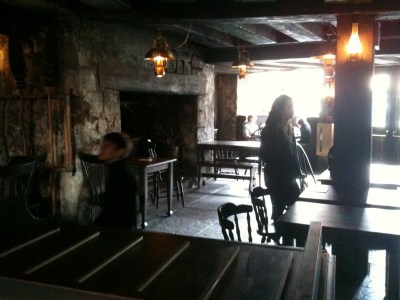 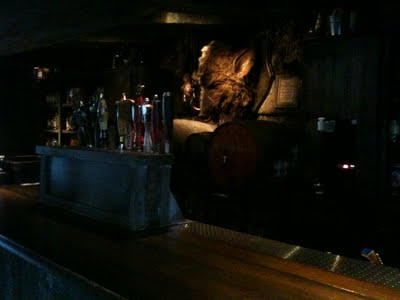 Don’t miss Honeyduke’s and Zonko’s.  You may be tempted to skip the shops in favor of rides, but they truly are the most charming part of the experience.  The detail is incredible.  The two shops are connected, and there is a small counter where they connect that sells baked goods, including cauldron cakes and treacle tarts. 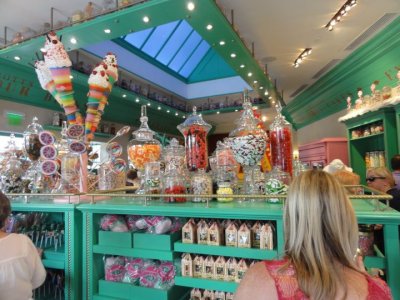 Final piece of advice.  Don’t buy your chocolate frog at Honeydukes, then expect to carry it around all day, unless you like melted frog.  They are available at the large shop at the entrance to Islands of Adventure on your way out.  If you forget, just remember the wisdom of Ron Weasley, “Rotten luck.  Besides, it’s the cards you want.”